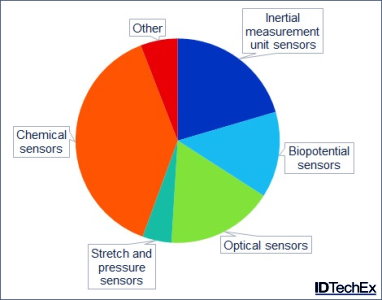 One feature sets a wearable Health Tech device from most other consumer electronic devices like an MP3 player is that the device not only distributes information — such as music — but it also gathers information as well. And to gather information, the device needs sensors. Clearly, the smartphone craze launched the demand for tiny sensors in a big way; phones need to know which way is up so that they can put an image on the display that is right side up. But tracking heartbeats, glucose, blood oxygen levels, and other useful biometric data requires lots of different and sophisticated sensors.

One of the interesting notes contained in the report is the market breakdown in 2020, as shown in the pie chart above. The inertial measurement sensors that are so key to most fitness devices and other wearables will be minor players. The largest segment will be the chemical sensors, which would hint at a larger role in the detection and measurement of biomarker chemicals — such as glucose — for maintenance and monitoring of common chronic diseases and conditions. This could lead to enormous savings in healthcare costs, which is a likely factor driving this growth.

Equally interesting are the predicted growth rates for various market segments. A sensor category that is in limited use today is most likely to see the fastest growth rates, but even taking this into account, the forecasts are interesting. Chemical sensors are predicted to have a compound annual growth rate CAGR) of 32%, but this comes in second behind the stretch and pressure sensors that are slated to grow at a 40% CAGR. In contrast, the inertial measurement sensors are expected to have the slowest growth, at 9.8% CAGR, which makes sense given their broad adoption already.

The take-away here is that there will be a strong market for sensors of all sorts, and we can expect that the individual components will continue to get smaller, more accurate, and lower cost over the next 10 years.