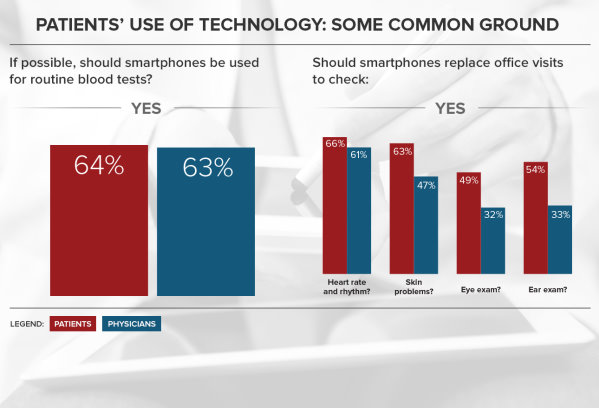 A new survey by online health site WebMD and its Medscape program for healthcare professionals find that doctors and patients are largely in agreement over the use of Health Tech devices. Now, the doctors surveyed were all part of the Medscape system, and all the patients were visitors to the WebMD site, so the survey probably has a bit of bias towards technology fans in the first place. Even so, the results are instructive and in some cases, surprising.

To start with, the question was asked if technology should be used by patients to assist in the diagnostic process. Patients were more enthusiastic than doctors (84% to 69%), but in both cases a clear majority favored the idea. Both groups were in favor (64% and 63%) of using smartphones for routine blood tests if possible. Smartphones also could be used to replace office visits for heart rate and rhythm checkups (66% patients, 61% doctors), but while half of the patients though smartphones should replace eye or ear exams, only about one third of doctors agreed.

The most surprising results were related to electronic health records (EHRs). Both patients and doctors agreed (96% for both) that patients should be allowed to view their EHRs. And when given this statement — “Because of privacy concerns, I’m hesitant to use digital health technology, including EHRs.” — 58% of patients and 60% of doctors disagreed. This broad support for EHRs could help make healthcare more efficient and transparent, and could help reign in the cost of healthcare in the U.S.