Electric Boots Are Made for Walking 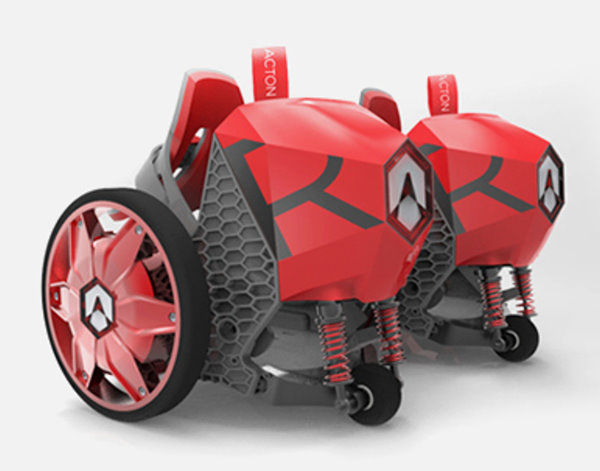 Forgive the mash-up of Elton John and Nancy Sinatra in the headline, but that more or less tells the story of RocketSkates, a new product under development by Acton. They come in three different models that differ mainly in their range and run-time on a single charge; the specs go from 6 to 10 miles, and 45 to 90 minutes of run-time. They are built for riders who weigh as much as 275 pounds, and can reach speeds up to 12 mph.

You control the skates through body motion in much the same way that you’d control a Segway. You choose either the left or right to be the Lead Skate, and when you lean forward on that skate, they both accelerate. Rock back on your heel to slow down and stop. The skates are designed to strap over most shoes, and you can also walk in them without taking them off.

These skates can also communicate using Bluetooth with an app running on a smartphone. The app can be used to track where you’ve been, but you can also control the Lead Skate remotely. This could be useful for people who may not be able to control the skates with their body, and also lets you turn the Lead Skate into a (rather expensive) RC car.

Acton launched the product as a KickStarter campaign, which reached its $50,000 goal within 24 hours. The company has now raised more than $300,000 for the project. One of the pledge deals was a pair of RocketSkates for $199, which was described as “more than $300 off retail price.” This would imply that the products will cost $500 or more when they come to market; they are expected to ship in October.

This product could be helpful to people with a number of disabilities and chronic illness. It could provide an intermediate choice between unaided walking and a wheelchair. Those who tire easily due to limited breathing capacity or heart disease could find that these skates can provide enough of a boost that they can get around on their own two feet.